You are here: Home » News » Health Benefits » 7 Common Plants You Might Find in Your Backyard That Could Save You a Trip to the Pharmacy

Plants were the original medicine, and many of the pills and other pharmaceutical remedies that exist today were derived from, or are based on, components of plants. There is recorded evidence from 3,000 BCE that people in China and Egypt used plants as medicine, and indigenous cultures around the world have done the same since well before recorded history.

“In the early 19th century, when chemical analysis first became available, scientists began to extract and modify the active ingredients from plants,” UMMC explains. “Later, chemists began making their own version of plant compounds and over time, the use of herbal medicines declined in favor of drugs.”

In 1987, roughly 85% of modern drugs were initially derived from plants, notes the American Herbalist Guild (it notes that less medicines derive from plants now), and according to UMMC almost a quarter “of pharmaceutical drugs are derived from botanicals.”

The World Health Organization estimates 80% of people worldwide use herbal medicines for some aspect of their health care.

Often, pharmaceutical and herbal medicines come from plants that are poisonous and lethal in the wrong doses, and they are safe only because they have been scientifically calculated by experts. However, there are a surprising number of benign garden plants that anyone can use to buffer their health. Some of these plants can potentially stand as alternatives to over-the-counter drugstore remedies.

Many common medicinal plants are likely growing in your yard or nearby fields-you just didn’t know to look for them, or thought of them as pesky weeds. It’s important to note that you should ever ingest any medicine, plant or otherwise, without consulting your doctor and/or a skilled herbalist. With that caveat, here is a short list of plants with known medicinal value that, depending on where you live, may already be growing in your garden:

Before you grab a pack of those sugary “immune system boosting” tablets at the store, you might want to look in your backyard. Those dots of yellow that relentlessly pop up on your lawn might be a better way to get your entire day’s worth of vitamin A and other immune-boostersv. You can eat dandelion greens and flowers raw in a salad, or cooked. Dandelion roots also make a bitter but beneficial tea.

In a paper published in the Journal of Herbal Pharmacotherapy, researchers found that in addition to the antioxidants in dandelion (like vitamin C and luteolin) that help maintain optimal liver function, dandelions can also mitigate liver hemorrhaging. They have been used to aid in digestion for millennia, and it’s medically known that good digestion reduces the risk of constipation, which ultimately helps prevent more serious gastrointestinal problems.

Watch a YouTube video that went viral earlier this year, on the health benefits of the dandelion.

Aloe vera is often marketed as a bright-green gel in pharmacies to treat sunburns and scrapes. According to the New York Botanical Gardens, more than 250,000 gallons of aloe vera gel “are used each year in cosmetics and health products.” Usually, these over-the-counter aloe products are expensive (retailing for $10 or more) and diluted with a number of chemicals or preservatives. A bottle of pure, unprocessed plant goo can cost up to $300. But if you live in a moderate or hot climate, you’re in luck, because you may find aloe vera plants growing wild in your yard. If not, chances are you can pick one up at a nearby plant nursery relatively cheap.

If you grow your own aloe, you’ll have on hand a powerful, time-tested remedy. Slice open a spiny aloe vera leaf, and the wet, sticky substance inside can be applied straight to the skin to soothe scrapes, burns and other skin irritations. Aloe relieves pain and itching, and also speeds up your skin’s healing time.

According to the New York Botanical Gardens, “the three chemicals that give aloe its soothing properties are aloin, barbaloin, and aloe-emodin. Aloe can also help fight mild skin infections.”

Catnip isn’t just for kitty to sniff and get weird. According to a 2001 article in Science Daily, catnip is a more effective insect repellent than the common (but toxic) chemical compound DEET—10 times more effective, according to researchers Chris Peterson and Joel Coats of Iowa State University. Catnip’s essential oil, called nepetalactone, gives it its characteristic odor, which mosquitos apparently despise.

Sarah Lipoff offers a detailed breakdown on PopSugarof how to make a DIY insect repellent from catnip. Keep in mind, catnip can attract cats large and small, so if you’re headed into a wilderness populated by large felines you might want to opt for another DEET-free bug repellent (such as lemon eucalyptus).

Sage is both aromatic and healing. According to a YES Magazine article by Miles Schneiderman, sage can be used for “Cooling and drying body functions because of its phytosterols. This property makes sage useful in treating high fevers, diarrhea, and excessive sweating or phlegm, as well as throat inflammation, asthma, and bronchitis.”

Schneiderman recommends drying sage leaves to eat or brewing them fresh in a tea. “For all medicinal infusions, make sure to cover the tea with a lid for at least 10 minutes before drinking to avoid the evaporation of critical ingredients.”

This common little green weed grows all over the world. Commonly called “plantain” (not to be confused with the fruiting plant that is banana’s close relative) it is a perennial green herb you can eat as well as use to soothe skin irritations. It's great for bug bites and rashes, and its leaves are especially rich in vitamins (A, C, K and B1) as well as riboflavin.

“Plantain, one of the most widespread 'weeds' in the world, is a first-choice remedy for many skin ailments. It is safe and effective, for not only bee stings, but also for bleeding, cuts, bruises, bug bites, hemorroids, and itchy skin. Its ability to draw out infection—as well as spinters and even glass shards-is especially remarkable,” according to herbalist Corinna Wood.

The simplest way to use plantain for the skin, Wood explains, is to pick a leaf, chew it up in your mouth, and place it onto the affected area. Or if you prefer, you can chop it up and throw it in the blender with some water. "All parts of the plant, including the seeds, are edible," she says. 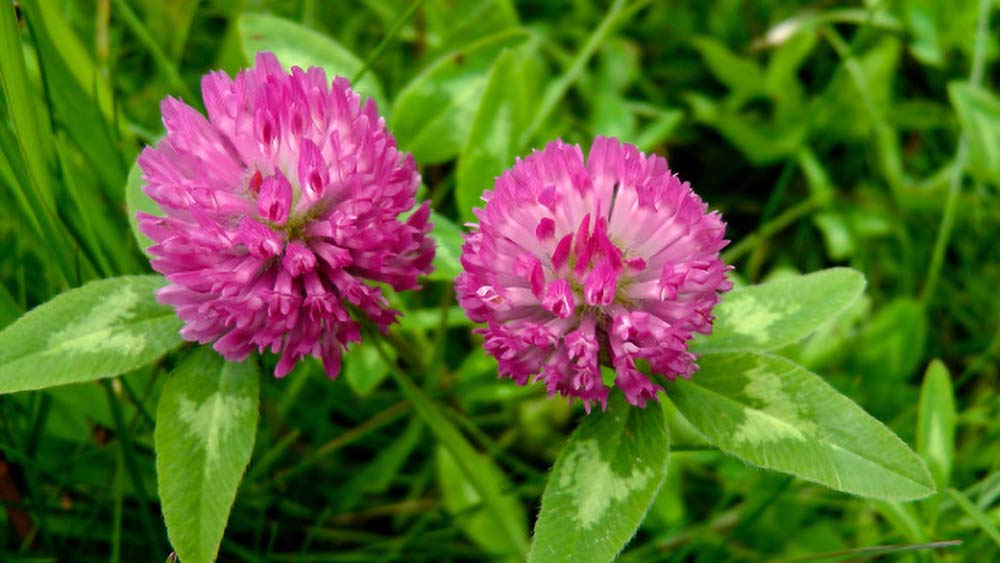 Chances are you’ve seen red clover growing in fields and pastures, but did you know you can potentially use it to replace over-the-counter cough medicines or reduce the sypmtoms of menopause? It’s a healthy addition to salad or soup, and can also be dried for a tasty tea. Red clover contains calcium, chromium, magnesium, niacin, phosphorus, potassium, thiamine, and vitamin C, as noted by UMMC, and is “a rich source of isoflavones (chemicals that act like estrogens and are found in many plants).”

Researchers theorize that "isoflavones, like those found in red clover, might help reduce symptoms of menopause, such as hot flashes and night sweats, because of their estrogen-like effects. So far studies have been mixed. Several studies of a proprietary extract of red clover isoflavones suggest that it may significantly reduce hot flashes in menopausal women. However, the largest study showed no effect.”

UMMC notes that red clover has traditionally been applied to the skin as an ointment for psoriasis, ecezema and other rashes, and used as a cough remedy in tea. Cannabis still remains federally illegal, even if you live in a state where it’s allowed. Due to government red tape, most of the herb's health benefits have yet to undergo FDA-approved human studies, but there are stacks of research worldwide that support the plant’s healing properties.

Among the many healing potentials of the herb are its effectiveness as an alternative to opioids for pain, in particular chronic pain. Its life-saving effects for children (and adults) with epilepsy are widely known at this point, and anecdotal evidence-as well as some studies-points to its ability to mitigate cancer and other tumors.

Even if you live in a place where psychoactive cannabis is illegal, you can likely still get your hands on some hemp (see a breakdown of the difference between the two). Hemp seeds are a strong source of fatty acids and proteins as well as vitamin E, phosphorus, potassium, sodium, magnesium, sulfur, calcium, iron and zinc. The cannabinoids found in both hemp and psychoactive cannabis plants are likely beneficial for a number of health regulatory brain functions.

If you’re able to grow this contentious yet healing plant, you can eat cannabis greens raw in a smoothie, cook its oils into treats and smoke or vaporize its flowering buds.