You are here: Home » News » Health Benefits » Extract from this weed can disrupt MRSA 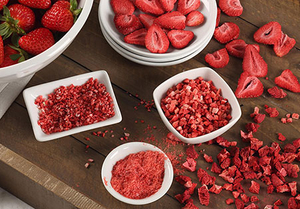 What is the Difference Between Freeze-Dried and Dehydrated Fruits?
Many people make use of freeze fried and dehydrated fruits as an efficient way to keep fruit on hand regardless of the season. While both types of fruits are dried, they differ in a few important ways. One of the most important differences is the process used to create the final product. When fruit
Read More>>

Extract from this weed can disrupt MRSA

The red berries of the Brazilian peppertree—a weedy, invasive plant common in Florida—contain an extract with the power to disarm antibiotic-resistant staph bacteria, a new study shows.

“Traditional healers in the Amazon have used the Brazilian peppertree for hundreds of years to treat infections of the skin and soft tissues,” says Cassandra Quave, assistant professor of dermatology at Emory University.  “We pulled apart the chemical ingredients of the berries and systematically tested them against disease-causing bacteria to uncover a medicinal mechanism of this plant.”

A refined, flavone-rich composition extracted from the berries inhibits formation of skin lesions in mice infected with methicillin-resistant Staphylococcus auereus(MRSA). The compound works not by killing the MRSA bacteria, but by repressing a gene that allows the bacteria cells to communicate with one another.

Blocking that communication prevents the cells from taking collective action, a mechanism known as quorum quenching.

“It essentially disarms the MRSA bacteria, preventing it from excreting the toxins it uses as weapons to damage tissues,” Quave says. “The body’s normal immune system then stands a better chance of healing a wound.”

The discovery, published in Scientific Reports, may hold potential for new ways to treat and prevent antibiotic-resistant infections, a growing international problem that  causes at least two million illnesses and 23,000 deaths in the United States, each year, according to the Centers for Disease Control and Prevention.

The United Nations last year called antibiotic-resistant infections a “fundamental threat” to global health and safety, citing estimates that they cause at least 700,000 deaths each year worldwide, with the potential to grow to 10 million deaths annually by 2050.

In contrast, the Brazilian peppertree extract works by simply disrupting the signaling of MRSA bacteria without killing it. The researchers also found that the extract does not harm the skin tissues of mice, or the normal, healthy bacteria found on skin.Blasting deadly bacteria with drugs designed to kill them is helping to fuel the problem of antibiotic resistance. Some of the stronger bacteria may survive these drug onslaughts and proliferate, passing on their genes to offspring and leading to the evolution of deadly “super bugs.”

“In some cases, you need to go in heavily with antibiotics to treat a patient,” Quave says. “But instead of always setting a bomb off to kill an infection, there are situations where using an anti-virulence method may be just as effective, while also helping to restore balance to the health of a patient. More research is needed to better understand how we can best leverage anti-virulence therapeutics to improve patient outcomes.”

It’s not tough to find

The Brazilian peppertree (Schinus terebinthifolia) is native to South America but thrives in subtropical climates. It is abundant in much of Florida, and has also crept into southern areas of Alabama, Georgia, Texas, and California. Sometimes called the Florida holly or broad leaf peppertree, the woody plant forms dense thickets that crowd out native species.

“The Brazilian peppertree is not some exotic and rare plant found only on a remote mountaintop somewhere,” Quave says. “It’s a weed, and the bane of many a landowner in Florida.”

From an ecological standpoint, it makes sense that weeds would have interesting chemistry, Quave adds. “Persistent, weedy plants tend to have a chemical advantage in their ecosystems, which help may protect them from diseases so they can more easily spread in a new environment.”

Quave is now doing additional research to confirm the safest and most effective means of using the Brazilian peppertree extract. The next step would be pre-clinical trials to test its medicinal benefits, says Quave, who studies how indigenous people incorporate plants in healing practices to uncover promising candidates for new drugs.

“If the pre-clinical trials are successful, we will apply for an application to pursue clinical trials, under the Food and Drug Administration’s botanical drug pathway.”

The Brazilian peppertree finding follows another discovery made by the Quave lab in 2015: The leaves of the European chestnut tree also contain ingredients with the power to disarm staph bacteria without increasing its drug resistance.

While both the Brazilian peppertree and chestnut tree extracts disrupted the signaling needed for quorum quenching, the two extracts are made up of different chemical compounds.

“The latest classes of antibiotics introduced to the market were actually discovered between the 1950s and 1980s,” Quave says. “Scientists have just been building off the same building blocks of earlier classes and modifying them slightly to create new antibiotics. Examining the extracts of plants used by traditional healers for infections may open up discovery of new chemical scaffolds for drug design, and provide important pathways for battling antibiotic-resistance.”

Additional researchers from Emory and from the University of Iowa are coauthors of the work, which was funded by the National Center for Complementary and Integrative Health, National Institutes of Health.