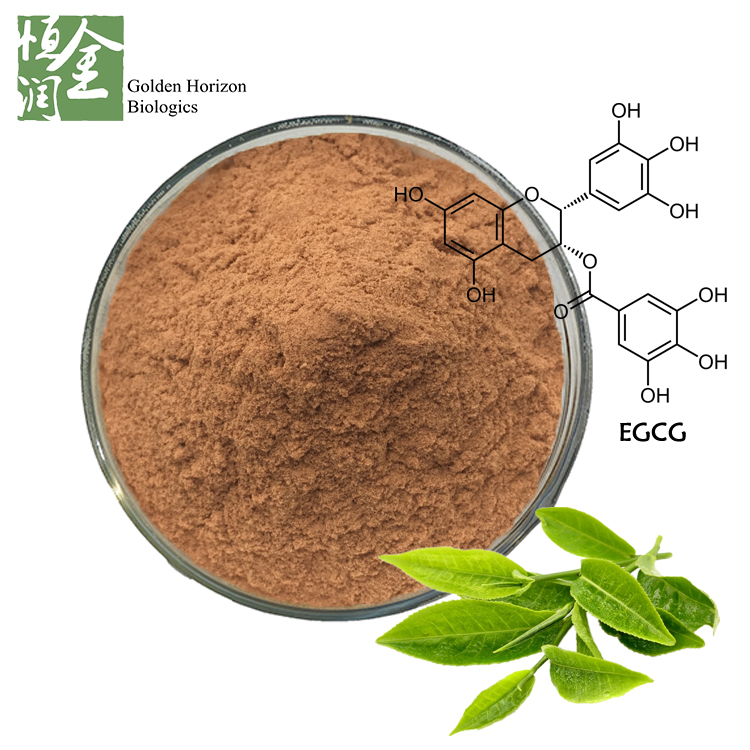 EGCG, the most abundant catechin in tea, is a polyphenol under basic research for its potential to affect human health and disease. EGCG is used in many dietary supplements.

EGCG is a kind of component extracted from Chinese green tea. It is the primary active and water-soluble component of green tea, which has the highest content among the tea catechins. By virtue of its peculiar stereochemical structure, EGCG possesses much stronger anti-oxidant activities and plays an important role in preventing cancer and cardiovascular diseases. In addition, it is potent as the reversal agent of MDR (Multidrug Resistance). As such, it may improve the sensitivity of cancer cells to chemotherapy drugs and reduce toxicity on the heart.

1. Green tea extract can be applied in food grade.

(1) Green tea extract has function of removing radicals and anti-aging.

2. Green tea extract can be used as cosmetics and daily chemical additive.

(1) Green tea extract owns the effect of anti-wrinkle and anti-Aging.

3. Green tea extract can be applied in pharmaceutical field.

(2) Green tea extract can enhance the immune function and prevention of colds.

(3) Green tea extract can be used to anti-radiation,anti-cancer,inhibiting the increasing of cancer cell.

(4) Green tea extract can be used to anti-bacterium, with the function of sterilization and deodorization.

Why Use Green Tea Extract?

Although drinking green tea can be a refreshing and healthy habit, its taste is not agreeable to many. Using sugar to offset its bitterness just becomes counterproductive to someone trying to lose weight. Adding milk to make it more palatable not only increases the calories but also hinders the absorption of catechins.

This is where green tea extract comes in. It is a herbal derivative containing all the active ingredients of green tea in concentrated form, available as capsules or liquid extract. Natural green tea also contains caffeine, although to a lesser extent than coffee. Caffeine is also a substance that boosts energy expenditure but many people are sensitive to it. The advantage of using green tea extract is that decaffeinated varieties are available.