Garlic, Latin name Allium sativum, belongs to the onion family Alliaceae including shallots, and leek. Garlic has been used throughout recorded history for both medicinal and culinary purposes. The garlic bulb is divided into sections called cloves.

Elephant garlic or Russian garlic is a variant of the species leek and not considered a true garlic. It has a tall, solid, flowering stalk and broad, flat leaves much like those of the leek, but forms a bulb consisting of very large, garlic like cloves.

Is Garlic Good for You?

Garlic is one of the most valuable and versatile foods on the planet. Garlic belongs to the Allium family of vegetables which also includes onions, chives, shallots and leeks.

Today garlic is a widely recognized health enhancing supplement. Garlic promotes the well-being of the heart and immune systems with antioxidant properties and helps maintain healthy blood circulation. One of garlic's most potent health benefits includes the ability to enhance the body's immune cell activity.

The active component in garlic is the sulfur compound called allicin. Allicin is the chemical produced when garlic is chopped, chewed, or bruised. Allicin is quite powerful as an antibiotic and a potent agent that helps the body to inhibit the ability of germs to grow and reproduce. In fact, it's said that 1 milligram of allicin has a potency of 15 standard units of penicillin.

There are now over 12 studies published around the world that confirm that garlic can reduce cholesterol.

Recently researchers in Oxford and America have published some summaries of all the good data on garlic. Garlic is known to stimulate T-lymphocyte and macrophage action, promote interleukin-1 levels, and support natural killer cells. Strong activity of these key cells promotes healthy immune system function, and strengthens the body's defenses. Garlic was rare in traditional English cuisine (though it is said to have been grown in England before 1548), and has been a much more common ingredient in Mediterranean Europe.

Builders of the ancient pyramids were said to eat garlic daily for enhanced endurance and strength.

Garlic was placed by the ancient Greeks on the piles of stones at cross-roads, as a supper for Hecate.

Roman emperors couldn't eat enough of it, as it was considered an antidote to poisons which were very popular in certain political circles of the time.

The Spanish have long used garlic as a preservative which helps to add creadence to it's anti-bacterial properties and whole books have been devoted to the health benefits of garlic.

The inhabitants of Pelusium in lower Egypt, who worshipped the onion, are said to have had an aversion to both onions and garlic as food.

European beliefs once considered garlic a powerful ward against demons, werewolves, and vampires. To ward off vampires, garlic could be worn, hung in windows or rubbed on chimneys and keyholes.

Garlic has germanium in it. Germanium is an anti-cancer agent, and garlic has more of it than any other herb. In lab tests, mice fed garlic showed no cancer development, whereas mice that weren't fed garlic showed at least some. In fact, garlic has been shown to retard tumor growth in human subjects in some parts of the world.

Another benefit of garlic is it helps regulate the body's blood pressure. So whether you have problems with low or high blood pressure, garlic can help equalize it.

Garlic helps strengthen your body's defenses against allergies; helps loosen plaque from the artery walls; helps regulate your blood sugar levels; and is the best choice for killing and expelling parasites such as pin worms from the human body.

In addition to all these health benefits, garlic is packed with vitamins and nutrients. Some of these include protein, potassium, Vitamins A, B, B2 and C, Calcium, Zinc and many others.

In a 12-week, double-blind, placebo-controlled study, allicin powder was found to reduce the incidence of the common cold by over 50%.

Garlic and onions are toxic to cats and dogs.

Garlic can thin the blood similar to the effect of aspirin.

It is traditional to plant garlic on the shortest day of the year. Whether this is for symbolic or practical reasons is unclear.

Today, we know garlic is an excellent herb for creating and maintaining overall health, but it also has many lesser known, but powerful qualities. For example, many people don't know that it's a naturally powerful antibiotic. This natural antibiotic is effective against toxic bacteria, viruses, and fungus. Available in pills, capsules, liquid and actual raw cloves, garlic is one of the most popular healthy herbs around today.

The antioxidant properties of garlic help scavenge harmful free radicals, which can damage LDL (bad) cholesterol in the blood stream.

Garlic and Your Heart.

The positive effect of garlic on your circulatory system is extremely well documented and it has been proved to: lower blood pressure

decrease platelet aggregation lower serum triglycerides and LDL-cholesterol ( the bad type) levels increase serum HDL-cholesterol (the good type) and fibrinolysis (the process through which the body breaks up blood clots.) Plus it stimulates the production of nitric oxide in the lining of blood vessel walls, a substance that helps them to relax. As a result of these beneficial actions garlic helps to prevent arteriosclerosis and thereby reduces the risk of heart attack or stroke.

Two or three cloves a day have cut the risk of subsequent heart attacks in half in heart patients.One reason for these beneficial effects may be garlic's ability to reduce the amount of free radicals in the bloodstream. According to a study published in Life Sciences, a daily dose of 1 ml/kg body weight of garlic extract for a period of 6 months resulted in a significant reduction in oxidant (free radical) stress in the blood of arteriosclerosis patients. It's positive effect on the circulatory system improves blood flow throughout the body so has even been hailed as a cure for impotence!

Current research has shown that a number of readily available foods such as garlic and onions that make up a healthy diet, actually have a major impact on cancer prevention. The protective effect of garlic seems to be greater than that of onions, even though onion consumption has been shown to reduce the risk of stomach cancer. These cancer fighting foods seem to have the ability to interfere with the development of cancerous tumors.

The October 2000 issue of the American Journal of Nutrition had a summary of a number epidemiologic studies which showed that people who consumed cooked or raw garlic on a regular basis compared to those that ate little or none had about half the risk of stomach cancer and one-third less risk of colorectal cancer.

This remarkable little bulb now tops the American National Cancer Institute's list of potential cancer-preventative foods. It contains multiple anticancer compounds and antioxidants, more than 30 at the last count, which such powerful compounds as quercetin, diallyl sulphide,allin and ajoene. These have the ability to block cancer causing agents such as nitrosamine and aflatoxin which have been specifically linked to stomach, lung and liver cancer. Garlic's ajoene and allicin have also been shown to retard cancer cells as a type of natural chemotherapy.

The Iowa Women's Health Study discovered that women who included garlic in their daily diet had lower risks for colon cancer.

Meat cooked at high temperatures (well done to burnt) can produce carcinogenic (cancer producing) chemicals and research has recently discovered that when meat is cooked with garlic this effect is limited.

Garlic- and the Immune System.

Not surprisingly the presence of all these antioxidants in garlic have a very positive effect on the immune system in general and can therefore protect the body against all types of bacterial and viral attacks. Research has recently even shown it to have an inhibiting effect on MSRA which is currently reeking such havoc in U.K. hospitals.

Garlic also acts as a good cold medication, decongestant and expectorant. It is a surprisingly good source of vitamins C, B6 and the minerals selenium and manganese all of which have long been associated with immune system boosting as well as other benefits. 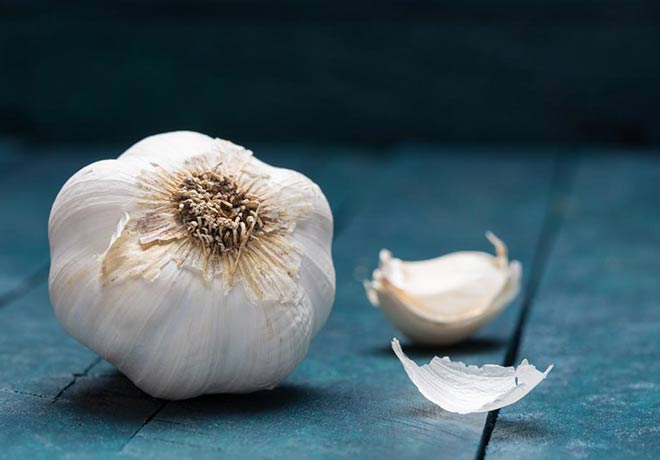 Allicin is the most potent substance found in garlic and this has been shown to not only lower blood pressure, insulin and triglyceride levels in laboratory animals fed a sugar rich diet, but also to prevent weight gain.

A study published in the American Journal of Hypertension reported that animals who developed high insulin levels, high blood pressure, and high triglycerides were given either allicin or served as a control.

Although all of the animals consumed the same amount of food, weight rose only in the control group whereas the animals who were being supplemented with allicin maintained stable weight or a slight decrease was actually noticed.

The researchers concluded that allicin may be of practical value for weight control.

What is Garlic? Garlic Extract Benefits garlic extract garlic powder Is Garlic Good for You? Garlic and onions are toxic to cats and dogs. Garlic for Health Garlic for Heart. Garlic Promotes Weight Control. Garlic for cancer