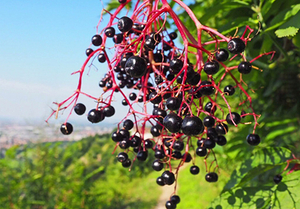 Elderberry Enhances Immunity And Anti-Virus
The outbreak of the new type of coronavirus has aroused everyone's attention to ingredients that have the functions of enhancing immunity, clearing away heat and detoxifying. For a while, honeysuckle, isatis root, forsythia, platycodon, scutellaria and other traditional Chinese medicine ingredients
Read More>>

Melatonin is a hormone found naturally in the body. Melatonin used as medicine is usually made synthetically in a laboratory. It is most commonly available in pill form, but melatonin is also available in forms that can be placed in the cheek or under the tongue. This allows the melatonin to be absorbed directly into the body.

People use melatonin to adjust the body's internal clock. It is used for jet lag, for adjusting sleep-wake cycles in people whose daily work schedule changes (shift-work disorder), and for helping blind people establish a day and night cycle.

Melatonin is also used for the inability to fall asleep (insomnia); delayed sleep phase syndrome (DSPS); rapid eye movement sleep behavior disorder (RBD); insomnia associated with attention deficit-hyperactivity disorder (ADHD); insomnia due to certain high blood pressure medications called beta-blockers; and sleep problems in children with developmental disorders including autism, cerebral palsy, and intellectual disabilities. It is also used as a sleep aid after discontinuing the use of benzodiazepine drugs and to reduce the side effects of stopping smoking.

Other uses include breast cancer, brain cancer, lung cancer, prostate cancer, head cancer, neck cancer, and gastrointestinal cancer. Melatonin is also used for some of the side effects of cancer treatment (chemotherapy) including weight loss, nerve pain, weakness, and a lowered number of clot-forming cells (thrombocytopenia).