According to a study published in the ‘International Journal of Pharmacokinetics’, Pharmako Biotechnology's self-microemulsifying drug delivery system (SMEDDS) AquaCelle can triple the absorption of coenzyme Q10. The study also found that CoQ10 ’s AquaCelle system is comparable to or even better than the ubiquinone absorption system (an electron-rich coenzyme). The company emphasized that because of the reduced dosage in the combined formula, these findings have helped to apply to new forms of food carriers such as beverages, shots, jellybeans and cream.

This new human pharmacokinetic study provides more evidence to support AquaCelle technology and its ability to increase the bioavailability of lipophilic components. By reducing the relevant dose or enhancing the efficacy of the ingredients by enhancing absorption, AquaCelle brings benefits to consumers and brings the key to differentiation for brand companies.

The study quantified CoQ10 pharmacokinetics in blood samples from baseline to 24 hours after supplementation. After taking a single dose of CoQ10 100 mg, the study found that all three AquaCelle combinations had significantly higher absorption rates compared to the standard CoQ10 in the oil dispersion.

The company stated that the patent-pending system was specifically designed to improve the bioavailability of lipophilic active substances. The lipid-based formula self-assembles into a micellar colloidal delivery system in a body-water environment (such as the stomach) , And then these micelles will wrap fat-soluble ingredients to help the benefits of these ingredients be more fully absorbed by the body. In addition to fat-soluble nutrients such as CoQ10, AquaCelle can also be used in Omega-3s, lipophilic plant extracts (such as milk thistle, curcumin, and grape seed extracts), as well as fat-soluble vitamins A, D, E, and K . 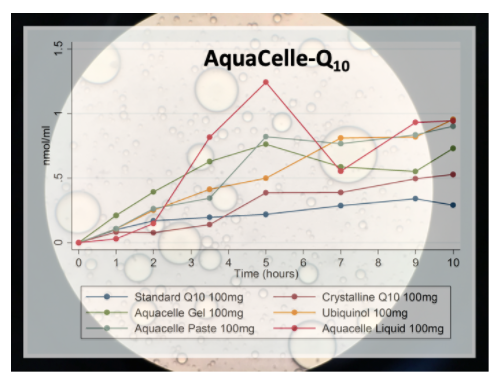 The results also showed that at the same 100 mg dose, the combination of CoQ10 and AquaCelle competed with the typical absorption of ubiquinone for better absorption. Since ubiquinone is a very expensive ingredient, it presents challenges in terms of production and stability, and AquaCelle can provide the same functional benefits.

George Kokkinis, co-founder and technical director of Pharmako, said that AquaCelle-Q10 can allow brand companies to reduce the dosage and cost of expensive ingredients, or improve the efficacy of Q10. At present, the company has more than ten human pharmacokinetics and clinical research in progress, and will further explore new frontiers of drug release technology and systems.

In addition, a recent study by Arjuna found that its Indian gooseberry extract can relieve dyslipidemia, which is a major risk factor for atherosclerosis. Lipid balance is achieved without lowering plasma CoQ10 levels, a phenomenon commonly associated with some lipid-lowering drugs.