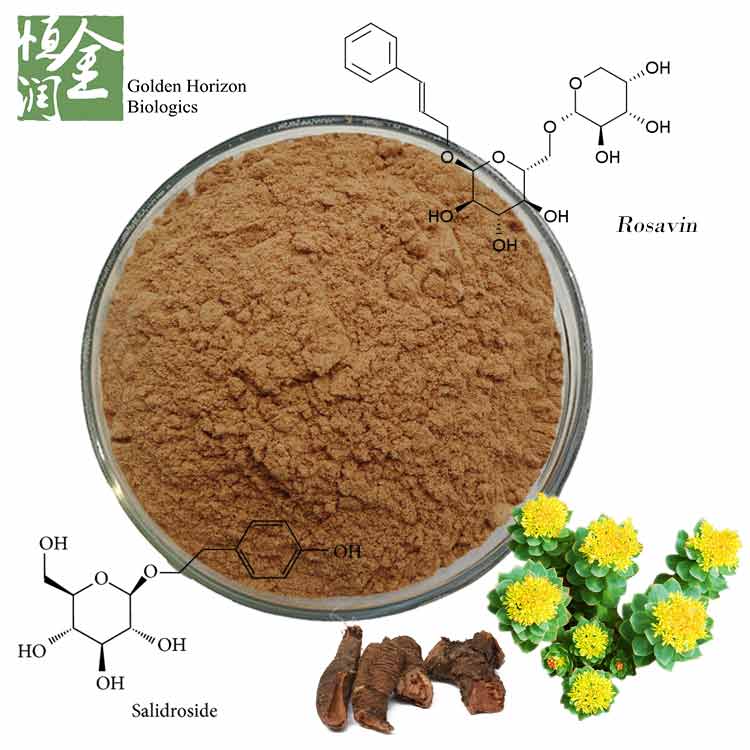 [Product Information]: Rhodiola extract is an extract of Rhodiola root, which is sweet and bitter. The main ingredients are salidroside, guanidine tyrosol, and vesevex, which have the functions of enhancing immune function, protecting cardiovascular and cerebrovascular diseases, and anti-cancer and anti-depression.

[Source]: Rhodiola extract is a natural extract obtained from the sedum plant, Rhodiola rosea, which has been refined, concentrated and dried. Very soluble in water, soluble in methanol, soluble in ethanol, insoluble in ether. More stable to heat.

[Storage]: Sealed, protected from light, in a cool dry place.

[Shelf period]: The shelf life is 2 years when the storage requirements are met.

The efficacy and effect of Rhodiola rosea extract:

The effect of Rhodiola extract

The role of Rhodiola rosea extract

1. Modern medical research proves that Rhodiola contains 35 kinds of trace elements, 18 kinds of amino acids, vitamins A, D, E and anti-aging active superoxide. Its nutritional components are complete and compatible, and it is found in the plants found so far. It is rare. In pharmacology, it has been proven that Rhodiola has a central excitatory effect and an "adapted to the original" effect, which can eliminate people's "tiredness", strengthen memory and attention, and restore the heart of the accelerated contraction frequency to normal.

2. Excessive fatigue or need to improve mental and attention to healthy people, post-illness, various types of neurosis, autonomic nerves, vascular dystonia, muscle weakness patients, can use Rhodiola products. It has a good auxiliary effect on correcting the side effects induced by the use of neurotherapeutics and neurasthenia, menopausal syndrome, and mountain insufficiency.

4. In recent years, pharmacists at home and abroad have conducted in-depth research on Rhodiola, and proposed that Rhodiola has the effect of “accommodating the original” with similar ginseng “supporting the original”, and in some respects it is better than ginseng. There is no shortage of ginseng excitement.

Rhodiola contains active ingredients with strong sedativeness, regulates metabolism, regulates the two-way regulation of blood sugar and blood pressure by the nervous system and endocrine system, and is used for the treatment of cerebrovascular diseases, senile myocardial failure, diabetes, hypotension, etc. For post-illness physical weakness, old and weak, nerve fatigue and so on.

5. The experiment proves that Rhodiola preparation can also enhance the body's resistance to unfavorable environment, and has various physiological activities such as anti-cold, anti-fatigue, anti-aging, anti-microwave radiation, etc., and takes the red scene for people working in special environments.

After the preparation of the day, it has a significant enhancement of the body's resistance to stress and adaptability. The excellent quality of Rhodiola has attracted extensive attention from the medical community at home and abroad. It has been found that Rhodiola has strong inhibition and regulation of the central nervous system, and has good anti-fatigue, anti-oxidation, anti-aging and anti-aging. Radiation, anti-tumor and anti-inflammatory, detoxification, and enhance the role of autoimmunity, is the potential activator of the human body's own cells, and has a good overall conditioning effect on the human nervous system, blood circulation system, metabolic system, endocrine system and so on.

Rosavins stimulates the immune system through two pathways: First, through direct special stimulation of immune defenses (stimulation of one of the most important types of immune cells: Natural killer cells. NK-cells search and destroy The infected cells of the body).

Rhodiola rosea restores normal immune system by improving T-cell immunity. This shows that it can enhance the body's resistance to the accumulation of toxicosis. Second, the body is not susceptible to pressure. When we are exposed to stress for a long time and continue to draw energy from other systems, the overall impact is reduced immune response and poor health. Rhodiola rosea extract can also enhance B cell immunity by preventing inhibition of B cell immunity due to stress and fatigue.

In the red spot, it contains a lot of scopolamine, kaempferol and other antibacterial and anti-inflammatory ingredients; the enamel content is also the most, with astringent, protective effect on the mucosal surface, stop excessive secretion, stop excessive bleeding, on the lungs Cough, cough, and increased vaginal discharge in women are effective.

In animal experiments, Rhodiola extracts called rosavin and salidroside showed increased speed of delivery of serotonin precursors, tryptophan and 5-hydroxytryptophan into the brain. Serotonin is a widely studied brain neurotransmitter that chemically includes multiple functions. Unstable serotonin is associated with a variety of abnormal mental states such as clinical depression.

Therefore, Rhodiola is used alone by Soviet scientists or mixed with antidepressants to enhance people's mental state, becoming a valuable medicine for those who live in countries and seasons that have not been able to get enough sunshine due to the extended period of the month.  In a public clinical trial to test the efficacy of Rhodiola extract in relieving depressive symptoms, 128 patients were given Rhodiola rosea extract. Rhodiola rosea extract effectively relieves or removes depressive symptoms in 65% of patients.

Rhodiola extract has been shown to relieve cardiovascular damage and dysfunction caused by stress. Rhodiola rosea extract prevents the contraction of the heart due to ambient pressure in the frozen state and contributes to stable contraction. Pretreatment with Rhodiola appears to trigger a beneficial adaptive response to this type of stress. When the mice after taking Rhodiola were exposed to the frozen state, the decrease in the contractile force of the heart was prevented, and the stable contractility of the heart tissue continued to occur during the perfusion.

Other reports suggest that the use of Rhodiola rosea extract protects against cardiovascular tissue in rats with stress-induced catecholamine release and adrenaline-induced arrhythmias. The antiarrhythmic effect of Rhodiola rosea extract is considered to be a secondary effect of its ability to induce opiate biosynthesis and involves the stimulation of peripheral Kappa opioid receptors. Rhodiola rosea extract also shows efficacy against stress-induced or worsening heart problems. The effect on these conditions is based on its ability to reduce the total amount of catecholamines and steroids released by the adrenal gland due to stress.

Abnormal secretion of these stress hormones can lead to an increase in blood pressure, cholesterol, potassium levels and a risk factor for heart disease. Rhodiola has been found to reduce harmful blood lipids and thereby reduce the risk of heart disease. It also reduces the total amount of circulating AMP (c-AMP) released into the heart cells. Cyclic AMP is associated with ATP (adenosine triphosphate), a major energy-supplying molecule in the body. C-AMP acts as a 'second messenger' or a liaison substance for the environment inside and outside the cell. It helps the intracellular calcium flow into the heart and greatly increases the potential energy of the heart muscle contraction. Rhodiola thus regulates heart beats to prevent arrhythmia.

It can quickly improve the binding ability of hemoglobin and oxygen, increase blood oxygen saturation, reduce the body's oxygen consumption, increase exercise endurance, and restore post-exercise fatigue. And by limiting the adverse effects of free radical damage, it can effectively resist diseases caused by aging. [Experiment] Male mice (body weight 20 g or so) were selected and intraperitoneally injected with 0.4 mg/g body weight after training. The crawling time was recorded in the control saline group. The results showed significant differences. Observing the weight-bearing swimming test of mice, the results showed that the drug group was superior to the control group.

Just like Siberian ginseng, Rhodiola extract is often taken by athletes to enhance body function. Although the mechanism is still not fully understood, it appears to improve muscle/fat ratio and increase blood levels of hemoglobin and red blood cells.

Taking Rhodiola rosea extract shows potential as an anticancer drug and may be very effective when used in combination with several antitumor drugs. Transplantation of mice that cured Ehrlich adenocarcinoma and metastasized mice with Plas's lymphosarcoma, supplemented with Rhodiola rosea extract inhibited the growth of all types of tumors, reduced metastasis to the liver and prolonged survival. It also directly inhibits the growth and metastasis of Lewis lung malignancies transplanted.

When Rhodiola rosea extract and antitumor drug cyclophosphamide are used in combination to treat the same tumor model, the anti-tumor and anti-metastatic effects of the drug are effectively improved. The presence of free radicals is associated with the direct cause of cancer, a cell mutation. In addition, Soviet scientists found that oral Rhodiola inhibited tumor growth in 39% of experimental rats and reduced metastasis in rats by 50%. It can improve urinary tissue and immunity in patients with bladder cancer.

In experiments with various other cancers, including adenocarcinoma (glandular tissue cancers such as breast cancer) and lung malignancies. Rhodiola extracts all lead to a significant increase in the survival rate.

Rhodiola extract has a long history of improving sexual ability in Russian and Far Eastern cultures. In an open clinical trial involving 35 men with erectile dysfunction, premature ejaculation or both, with 100-150 mg of Rhodiola rosea extract for 3 months, 26 of 35 patients admitted their sexuality. The function has been substantially improved.

In a controlled placebo experiment on the effects of Rhodiola extract on intelligence, 120 people were employed for a proofreading experiment. Subjects were tested before and after taking Rhodiola extract or placebo. The records of the experimental group were significantly improved while the control group did not change. Members of both groups were continuously tested for their ability to complete proofreading tests within 24 hours of taking the extract or placebo. In the controlled group, the number of typos in the proofreading test was greatly increased, and the function of the group taking the Rhodiola rosea extract was much smaller.

The experiment used the mouse shake cage method, took the mouse activity frame and lever, and started to record the fast drum to trace the mouse activity. Intraperitoneal injection of salidroside (400 mg / kg) and normal saline (control group). The results showed that the drug group had a significant inhibitory effect on the activity of the mice (p < .001).

Significantly inhibits the production of heart and liver LPO (peroxidized lipid) caused by radiation, and protects lipids and cell membranes.