A unique herbal remedy, rhodiola grows and thrives in dry, sandy ground at high altitudes in Arctic areas of Europe and Asia.1 Soviet scientists have long known that this native herb—particularly the species known as Rhodiola rosea—can boost energy and treat mental fatigue, along with other conditions. Now that the Cold War has ended, so have the barriers to our knowledge of rhodiola’s benefits. News about this versatile herb is spreading around the world, prompting scientists to take a closer look at the herb’s many applications. Their new findings confirm the multiple physiological and psychological benefits of rhodiola, demonstrating that the herb indeed offers a powerful antidote to the stresses of modern-day life. 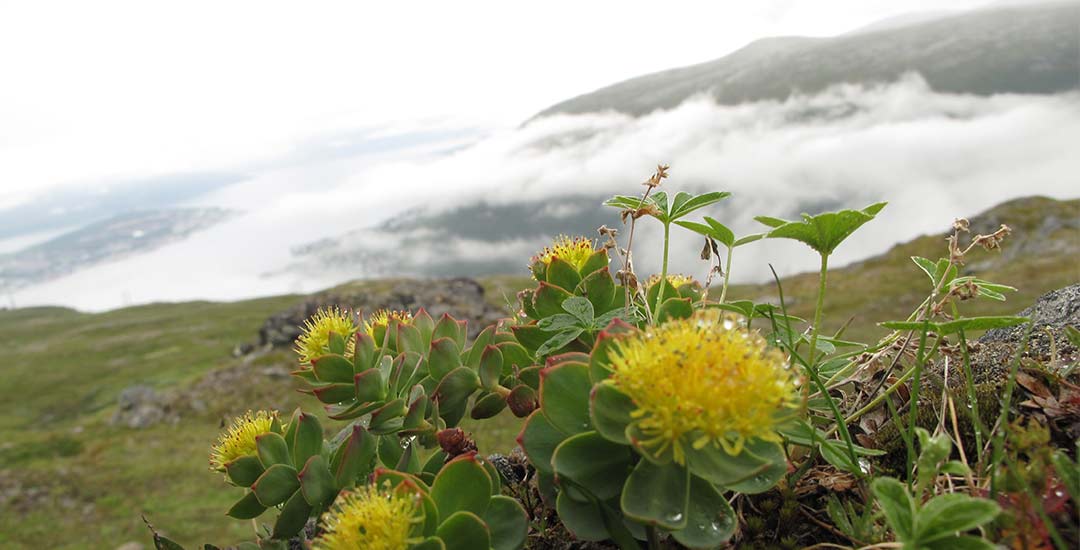 Improving the Body’s Response to Stress

Stress is an inevitable fact of life, but it can have serious consequences on our mental and physical health. Effective strategies for managing stress are therefore essential to thrive in a fast-paced world. Research suggests that rhodiola may offer a practical, natural solution for overcoming many stress-related complaints.

Rhodiola rosea relieves stress by balancing the body’s stress-response system. This consists of the sympathetic nervous system (which prepares the body to expend energy during crises, often described as the “fight or flight response”) and the counterbalancing parasympathetic nervous system (which recharges and heals the body, returning it to a relaxed state). With constant stress, the system becomes unbalanced, making us feel edgy, tired, or depressed. Rhodiola rosea helps re-establish balance by acting as an adaptogen—an agent that strengthens the body’s response to physical, mental, and emotional stressors.

It is believed that rhodiola enhances the body’s tolerance to stress by influencing key brain chemicals, such as serotonin and norepinephrine, and natural feel-good opioids such as beta-endorphins. 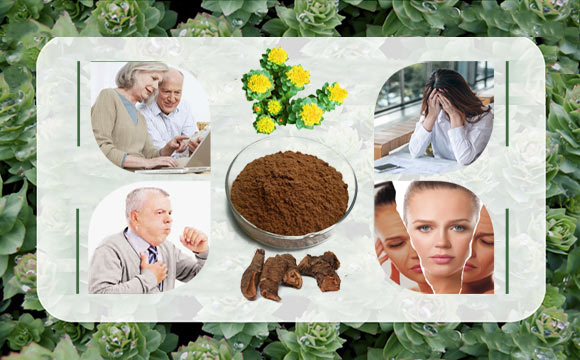 Rhodiola’s effects are particularly remarkable in the nervous system. According to Dr. Richard Brown of Columbia University, rhodiola is exceptionally beneficial because it “enhances the healing properties of one’s own nervous system.” He notes that the herb provides both “cognitive stimulation” and “emotional calming,” which lead to improvement in cognitive and memory function, as well as contributing to the long-term upkeep of brain function.

A number of studies have shown that rhodiola can dramatically reduce mental and physical fatigue under stressful conditions, by increasing the body’s energy levels. In one study, a low dose (170 mg/day) of a R. rosea extract was given to 56 young physicians on night call, when there is notable decrease in physical and mental performance.4 Using measures of cognitive and memory function, such as associative thinking, short-term memory, calculation, and speed of audiovisual perception, the researchers found a statistically significant reduction of stress-induced fatigue after just two weeks of supplementation with rhodiola. No side effects of rhodiola were reported.

In another study of rhodiola’s effects on work capacity, researchers gave 10 drops of R. rosea tincture (equivalent to 100-150 mg R. rosea extract) once or twice a day for two to three weeks to 27 healthy students, physicians, and scientists aged 19-46 years for several days before embarking on intense intellectual work, such as final exams. The group found improvements in the amount and quality of work, and in all cases rhodiola prevented a loss of work capacity because of fatigue.

Research has also revealed another benefit of rhodiola in helping to increase attention to detail-oriented tasks by improving concentration over a prolonged period. A series of studies using a proofreading test showed that a one-time dose of R. rosea of 300 mg or more significantly decreased the percent of errors made, particularly over an eight-hour period.

As well as enhancing memory, rhodiola also helps strengthen the body, making it more resilient to challenges such as exercise and fatiguing tasks.

In one study, the energy-boosting effect of small and medium doses of rhodiola was observed in animals that demonstrated greater strength to endure the “swim test”—a physically and mentally stressful test in which a rodent is put into a beaker of water and observed to see how long it can keep its head above water.

These findings were verified in another study in which rhodiola-treated rats were able to swim for 25% longer before becoming exhausted, compared with animals that did not receive rhodiola. As adenosine triphosphate (ATP) is the main energy currency of the body, the researchers concluded that rhodiola enhances exercise capacity by activating the synthesis or re-synthesis of this vital energy source and stimulating energy-repair processes after intense exercise.

As well as liberating more energy for exercise, rhodiola also helps protect muscle tissue during exercise. This effect was seen in a study of healthy untrained volunteers after exhausting exercise, in whom rhodiola extract reduced levels of C-reactive protein, an inflammatory marker, and creatinine kinase, a marker of muscle damage.

In just the past two years, new evidence has revealed even more diverse benefits of rhodiola. These include protecting the nervous system against oxidative stress, enhancing healthy sleep, lifting depressed mood, relieving anxiety, and maintaining blood sugar within a healthy range. 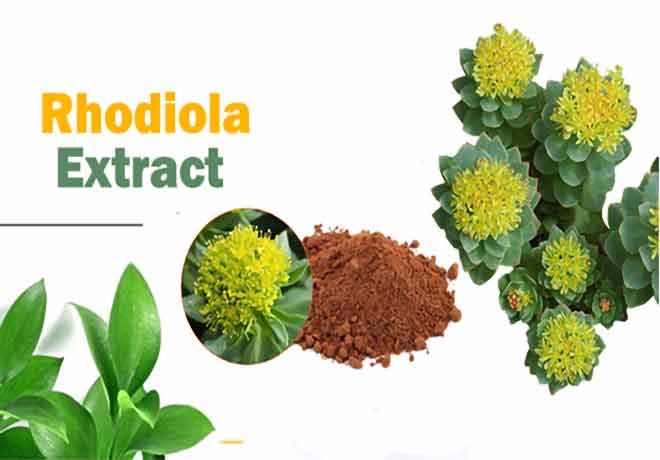 Recent research confirms that rhodiola has potent antioxidant effects that protect nervous system cells. A study at the Jiangsu Institute of Nuclear Medicine in China showed that salidroside, an active constituent found in rhodiola, protects human neuron cells from oxidative stress in several ways, including inducing several antioxidant enzymes. By protecting cells of the nervous system against oxidative stress-induced cell death, salidroside could be used “for treating or preventing neurodegenerative disease implicated with oxidative stress,” the scientists noted.

Rhodiola may also help soothe feelings of agitation and sleeplessness, according to a preliminary study at Heilongjiang University of Chinese Medicine. When rhodiola-derived salidroside was administered to mice along with the sedative pentobarbital sodium, it enhanced the drug’s sedative (calming) and hypnotic (sleep-inducing) effects. “Salidroside could obviouslyshorten the sleep latency and prolong the sleeping time of mice…

In addition, rhodiola may help support good mental health by lifting mood, relieving anxiety, and supporting a healthy response to stress. When investigators at the University of Camerino in Italy administered a water-alcohol extract of rhodiola to mice, they found that the extract “significantly, but not dose dependently, induced antidepressant-like, adaptogenic, anti-anxiety-like, and stimulating effects in mice.”

Furthermore, new evidence suggests that rhodiola may help offset another troubling manifestation of stress: anorexia, or discontinuation of eating. Scientists induced stress-related anorexia in rats either through immobilization or through injection of corticotrophin-releasing factor (the major mediator of stress responses in animals). At doses of 15 and 20 mg/kg, rhodiola extract reversed these anorectic effects. The researchers concluded that this study provides “functional evidence of claimed adaptogen and anti-stress properties of R. rosea.”

Rhodiola may even hold benefits for those challenged with elevated blood sugar or diabetes, according to new evidence. Scientists investigated the effects of R. rosea and Cinnamomi cassiae (cinnamon), both of which have been used as folk remedies for diabetes, in 10 rats with the disease. Each animal received each remedy for 12 weeks. “Cinnamomi cassiae and R. rosea extracts significantly decreased blood glucose, increased levels of reduced glutathione and the activities of glutathione reductase, glutathione S-transferase, glutathione peroxidase, catalase, and superoxide dismutase in the liver.” Based on these impressive findings, the researchers concluded that R. rosea extracts could be beneficial in “correcting hyperglycemia and preventing diabetic complications.”