It’s been 11 years since the FDA granted GRAS (generally recognized as safe) status to purified extracts of the stevia plant, clearing the way for stevia to be marketed as a calorie-free sweetener. Since then, stevia has become a widely used ingredient in a variety of “diet,” sugar-free, and reduced-sugar foods and beverages, including dairy products, cereal, candy, chewing gum, soft drinks, and flavored waters. It’s also sold in individual packets under such brand names as Truvia, Pure Via, and SweetLeaf, and in larger containers for use in home cooking, including baking. Stevia may be listed on product labels as stevia leaf extract, rebiana, stevioside, rebaudioside A, or rebaudioside D, among other terms.

All Natural? Not Exactly

The stevia plant (Stevia rebaudiana) is a South American shrub in the aster family (Asteraceae). It has a long history of use as a sweetener. The indigenous people of Paraguay, for example, have used its crushed leaves for centuries to sweeten their herbal teas and medicinal potions.

The high-purity extracts of stevia are different from whole-leaf stevia or crude extracts of the herb, which are classified as a dietary supplement, not a sweetener— and which can have a notably bitter aftertaste. The purified extracts are made by steeping the leaves of the plant to remove the sweet compounds, called steviol glycosides, which are 250 to 300 times sweeter than table sugar. Marketers tout stevia as a “natural” alternative to artificial sweeteners like saccharine and aspartame. It’s true that it derives from a substance found in nature rather than a synthetic chemical. But the stevia sold commercially is as highly processed as other sugar substitutes. In fact, Truvia and PureVia were developed in part by Coca-Cola and Pepsi Co., respectively. The companies were instrumental in securing stevia’s GRAS status in foods and beverages.

It’s worth noting that stevia packets contain only a little stevia extract, which is so intensely sweet that it wouldn’t be practical to sell it by itself in single-use packets. What you’re actually getting is stevia combined with a bulkier “carrier” agent. Truvia, for example, mixes stevia leaf extract with erythritol, a sugar alcohol. PureVia lists dextrose (a form of glucose usually derived from corn) as its first ingredient, followed by stevia (labeled as Reb A, short for rebaudioside A, a steviol glycoside). Both Truvia and PureVia also list “natural flavorings.”

Stevia is a useful sweetener for hot and cold drinks and can be sprinkled over foods for instant sweetness.

Stevia can be used in cooking, particularly where the primary role of stevia is to add sweetness. Stevia does not caramelise and may not function so well as a direct substitute for sugar in recipes in which sugar is an integral part of the structure or texture.

The suitability of stevia in baking may vary depending on the ingredients of the stevia product itself. Some stevia products have been formulated specifically for baking, however, it is advisable to check whether these will be suitable for your sugar levels as they may contain sugar.

Stevia is recognised as having properties which may result in the following health benefits: 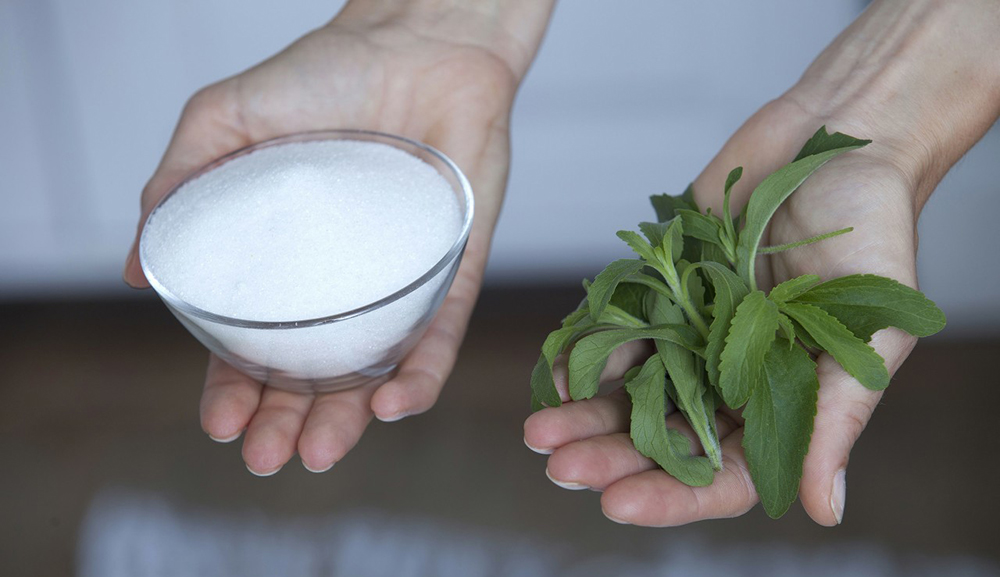 But is it safe?

Prior to 2008, stevia was banned as a sweetener by the FDA based on early toxicity studies in rats (generally using whole-leaf stevia or crude extracts), which suggested that it might cause reproductive problems. But subsequent animal studies using purified extracts have largely failed to find those or other adverse effects. Stevia was used as a food additive in Japan, Brazil, and China for years prior to its clearance for use in the U.S., with no apparent health risks to humans. Numerous regulatory agencies around the world, including the European Food Safety Authority, Health Canada, Food Standards Australia New Zealand, and JECFA (the Joint FAO/WHO Expert Committee on Food Additives, a collaboration between the UN’s Food and Agriculture Organization and the World Health Organization), have affirmed the safety of high-purity stevia extracts and approved their use in food.

The Center for Science in the Public Interest (CSPI), a nonprofit consumer advocacy group, considers stevia leaf extract to be safe in foods and beverages, after initially opposing its marketing in 2008 on the grounds that it hadn’t yet been adequately tested for cancer risk. (The group still calls for more testing to further establish stevia’s safety.) CSPI continues to warn consumers to avoid other sugar substitutes, including acesulfame potassium (acesulfame K), aspartame, saccharin, and sucralose.

Stevia is widely considered to be safe when used as a sweetener, and no health concerns have been raised during its 10-plus years in wide circulation in the U.S. But as with any sugar substitute, it’s wise not to go overboard. It’s one thing to use a packet or two in your coffee or tea or to eat an occasional “sugar-free” treat, but another to be consuming such foods all day long. After all, many products containing stevia or other sugar substitutes are highly processed “junk” foods, such as soft drinks, candy, and ice cream, that aren’t good for you to begin with. In contrast, sugar substitutes are not found in healthy whole foods like whole grains, legumes, and fresh fruits and vegetables— the types of foods that should make up the bulk of your diet.