You are here: Home » News » General Knowledge » The Active Ingredients Of Traditional Chinese Medicine Extracts Such As Turmeric May Help Eliminate The New Coronavirus

The novel coronavirus pneumonia (COVID-19) has evolved into a global pandemic. Worldwide, the situation of the new crown epidemic continues to escalate, and the prolonged soaring epidemic data even numbs us. So far, the cumulative number of confirmed cases worldwide has exceeded 16 million, and the death toll has exceeded 600,000. The effective ingredients of turmeric and other traditional Chinese medicine extracts may help eliminate the new coronavirus.

Curcumin is the effective ingredient of turmeric. Some studies have shown that curcumin can effectively kill tumor cells and can be used as one of the potential drugs for cancer treatment. The traditional Chinese medicine turmeric is the dried rhizome of the ginger family turmeric (Curcuma longa L.). When the stems and leaves are withered in winter, they are excavated, washed, boiled or steamed to the heart, dried, and the fibrous roots are removed. One of turmeric. In traditional Chinese medicine, turmeric is pungent, bitter and warm, enters the liver and spleen meridians, has the effects of breaking blood, promoting qi, clearing menstruation and relieving pain, and can be used for various symptoms of blood stasis and qi stagnation.

The struggle between mankind and the new crown virus has evolved into a protracted war. In fact, as early as March and April, many domestic and foreign scholars speculated that the new coronavirus may be similar to the flu virus, coexisting with humans for a long time, and the risk of multiple outbreaks is extremely high. Recently, domestic epidemics have also appeared occasionally. From the recent Beijing Xinfadi market to the recent Urumqi, Xinjiang, these small-scale epidemics are warning us-the new crown epidemic has not gone far, and we still need to be vigilant and preventive!

Although more and more drug candidates have entered the field of vision of scientific researchers, and a large number of clinical trials are being carried out globally, the real new crown drug has not yet appeared. It is worth noting that China has accumulated a lot of experience in the early fight against the new crown epidemic and launched a series of effective treatment programs, including some Chinese patent medicines.

Recently, researchers from Wuhan Institute of Bioengineering published a research paper entitled: Antiviral and viral effects of curcumin on transmissible gastroenteritis virus in vitro in the Journal of General Virology.

The study used an alpha-coronavirus-porcine transmissible gastroenteritis virus (TGEV) as a research model, and showed that curcumin, the main component of the traditional Chinese medicine turmeric, can prevent TGEV from infecting pigs, and at higher doses, this compound It was also found to kill TGEV.

Porcine transmissible gastroenteritis (TGE) is a highly contagious viral infectious disease characterized by vomiting, severe diarrhea, dehydration, and high mortality of piglets within two weeks of age. Its pathogen TGEV belongs to the coronavirus family The genus of alpha-coronaviruses has a certain degree of homology with the recently outbreak of SARS-CoV-2.

Studies have also shown that curcumin affects TGEV in many ways: it kills the virus directly before it can infect cells, binds to the virus envelope to inactivate the virus, and changes the cell's metabolism to prevent the virus from entering.

Curcumin affects TGEV in many ways

The time curve determination showed that curcumin mainly acts on the early stage of TGEV replication. It is worth noting that in the adsorption test, curcumin can reduce the virus titer to 3.55 log TCID50 ml-1 at 40 μM, which indicates that curcumin has an effect on TGEV. Adsorption has a good inhibitory effect. 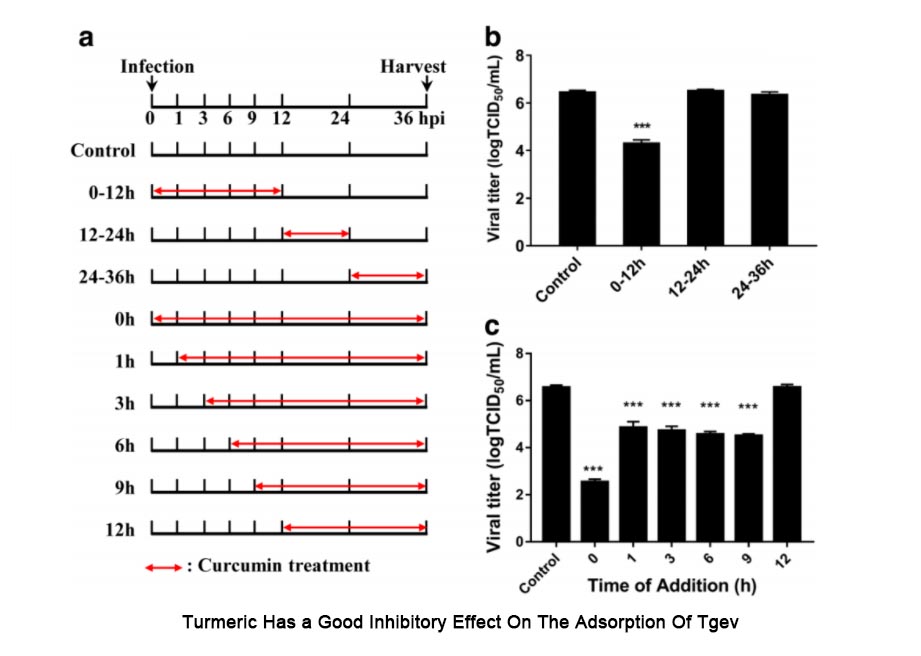 Curcumin has a good inhibitory effect on the adsorption of TGEV

In fact, in previous studies, curcumin has been proven to inhibit the replication of some viruses, including dengue virus, hepatitis B virus and Zika virus. In addition, curcumin has also been found to have many significant biological effects, including anti-tumor, anti-inflammatory and antibacterial activities.

"Our research proves that curcumin has an inhibitory effect on TGEV, which indicates that curcumin may be a candidate drug to effectively control TGEV infection," said Dr. Lilan Xie, the first author of the article: "There is currently no vaccine for virus disease prevention and control. It is very difficult, and traditional Chinese medicine and its active ingredients have the advantages of convenient access and low side effects, making them an ideal screening library for antiviral drugs."